In the Business of Trust: Tech Entrepreneur and Nobel Peace Prize Nominee Keith Krach Shares the Secret to Good Leadership

Keith Krach, former undersecretary of state and current billionaire entrepreneur, first started working at his father’s Ohio mechanics shop when he was 12. As he worked alongside his father, those valuable lessons his father imparted became the principles by which Krach has conducted business, from the time he was the youngest vice president of GM to his Silicon Valley ventures. They also inspired the goal Krach wanted to achieve during his time in public service: propelling America’s tech innovations so that she can continue to be the world’s foremost economic power.

Krach’s father and uncle were World War II veterans who were proud to serve their country. “They love telling stories about how America’s manufacturing might was a decisive factor in the war, and he also taught me that the key to America’s manufacturing prowess was fair competition in the marketplace. And that’s what drives productivity, and that’s what increased the standard of living throughout the world,” he said in a recent interview. That respect for America as a place that rewards hard work and integrity, coupled with his own boldness, led him to Silicon Valley. Krach turned cutting-edge tech startups into multi-billion-dollar public companies, such as DocuSign, the popular platform for signing agreements on electronic documents, and Ariba, a software offering businesses a more straightforward way to procure goods and services. The latter went public in 1999 as one of the first e-commerce companies geared toward businesses to do an initial public offering. 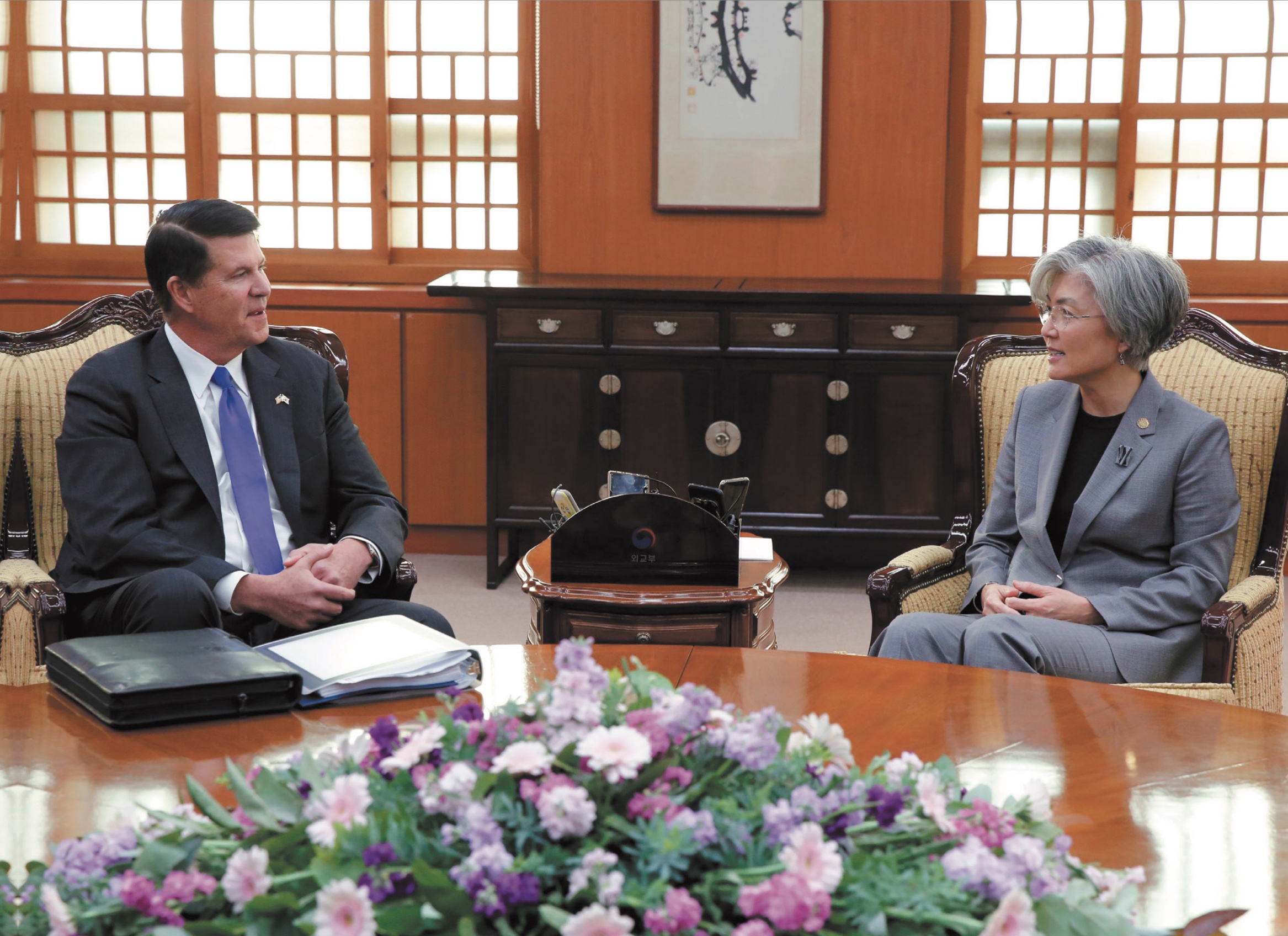 Later, while serving as undersecretary of state for economic growth, energy, and the environment, he spearheaded a campaign to protect American 5G innovations from authoritarian states that refused to play by the rules, earning him a Nobel Peace Prize nomination. A group of academics nominated him for developing a new model for countering unfair competition. Krach reflected that though he was sometimes advised against making such unprecedented moves, he felt that he had an obligation to serve his country. “I think sometimes people are afraid of consequences that aren’t really even going to be there. Besides, at the end of the day, you’ve got to look at yourself in the mirror and say, ‘Did I do the right thing?’ That’s the most important thing.”

Growing up in Rocky River, Ohio, Krach learned “the beauty of free enterprise” from his father: small businesses like his were the economic engine of American manufacturing, he often explained. He also said, as Krach recalled, “‘The American dream is when the student surpasses the professor.’ … His goal was to have me be better off than him and my children better off than me.”

After graduating from Purdue University and Harvard Business School with full scholarships from GM, Krach entered the auto company with fresh ideas. At the age of 24, he gave a presentation to the board of directors, proposing that the company start a robotics division, a relatively unexplored area at the time, around the 1980s. He convinced them to enter a joint venture with Fujitsu Fanuc, the leader in programming the “brains” of robotic machinery.

Through selling robotics to Silicon Valley, Krach was inspired by the risk-taking spirit of tech entrepreneurs. “[Silicon Valley] looked like the West Point of capitalism. You know—a United Nations, a total meritocracy.” He decided to go work for a software company. But on the second day of the job, he learned a hard lesson about what it meant to keep his integrity. “The CEO goes, ‘Keith, I want you to say this at the board meeting.’ I go, … ‘I won’t do that. That would be lying.’” His experience at the company went downhill from there. But it was a critical lesson that motivated him to start his own companies based on trust and integrity. “Those values are the most important thing in any company, because people can say, ‘Hey, I don’t like how you look. I don’t like where you went to school.’ But they can’t take away your integrity.”

His experience in Silicon Valley taught him that trust should be the basis of every relationship, business or personal. “You do business with people you trust, you partner with people you trust. You love people you trust, and so the most important skill is your ability to build that trust, and your biggest strategic asset are your trusted relationships, particularly when you’re starting a company from total scratch, right? And because they have to trust in you, they have to trust in your product, your processes, your company, how you’re going to treat them as a customer,” Krach said. He further explained that trust is like a “four-legged stool.” Within the idea of trust is having integrity, the capability to perform well, good judgment, and empathy. Instilling these principles enabled the staff at his companies to work together smoothly.

At DocuSign, where he was CEO and chairman for 10 years until he was confirmed undersecretary of state in 2019, the same values held true. During a meeting with employees, he told them, “We’re not in the software business. We’re in the trust business. We deal with people’s most important documents. … Trust is sacrosanct.”

He carried this idea with him when he was appointed to the State Department. He called it “the fastest decision I’ve ever made in my life, probably.” His father’s auto shop, and thousands of other small businesses in the Midwest, were gutted by China’s predatory trade practices. In Silicon Valley, he experienced first-hand having intellectual property stolen by Chinese state-backed companies. His father taught him to act if he witnessed something unfair. “It’s easy to sit back and think, somebody else can do this. But if everybody thinks that way, what do you got?”

Krach developed a new model for foreign relations, especially to target adversarial nations like China that don’t follow the rule of law—one that would leverage America’s strengths as an economic superpower and driver of entrepreneurship. Called the Clean Network, it created an alliance of nations and international telecom companies that promise to follow standards for transparency and not to use distrusted Chinese vendors that threaten data privacy. These countries and companies would be encouraged to partner with each other for 5G technology. Krach said he wanted to beat the aggressors at their game. “I would just harness the U.S.’s three biggest areas of competitive advantage: by rallying and unifying our allies and our friends, leveraging the innovation and resources of the private sector, and amplifying the moral high ground of democratic values—those trust principles,” he said. After all, America always played fairly.

His approach was seen as risky by some—many companies and countries are afraid of upsetting China for fear of retaliation, or because it may impact their China market. But Krach said he again believed in the importance of building trust among like-minded partners. By creating an alliance, “it gave them a security blanket, because there’s strength in numbers and there’s power in unity and solidarity.” For this approach to diplomacy, he was nominated for the Nobel Peace Prize earlier this year. He believes more tech executives should work together with the federal government—so they can counter foreign threats more effectively. In July 2021, he founded the Krach Institute for Tech Diplomacy at Purdue University, aimed at exactly this cross-section between foreign policy and tech. The institute conducts research on cutting-edge tech that could have implications for national security.

Krach firmly believes that entrepreneurship is what makes America the leader in innovation. And at the heart of it all, Silicon Valley, “the secret sauce … I think is mentorship.” He recalled that after he took Ariba public, the board recommended that he seek out advice from then-CEO of Cisco, John Chambers. Krach was surprised that Chambers agreed and invited him to ask any questions. One day, Krach asked Chambers why he was willing to teach him. Chambers said that he was mentored, too, by then-CEO of HP Lou Platt. Chambers said, as Krach recalled: “‘So Keith, I don’t ask for anything in return. I just asked you to do it for the next guy.’”

In 2019, Krach founded the Global Mentor Network, a program that matches young entrepreneurs with top Silicon Valley CEOs to teach them leadership skills and provide resources for succeeding. He hopes to inspire the next generation. “People go, ‘What do you think your legacy is going to be?’ And I go, ‘Well, it’s not the companies I led. It’ll be the people that I mentor.’” He thinks back to something his father said. “‘You never know if you’re a good father until you see your children’s children.’ You also don’t know if you’re a great leader until you see your mentees’ mentees, right?”

Our house has brought together two people—my husband and myself—along with 17th-, 18th-, and early 19th-century hand-water-colored prints of flora and fauna

Not many recipes call for a pair of broken-in running shoes, 93 cinder blocks, and somewhere to sleep as part of their

Today’s stand-up comedy is filled with F-bombs and N-words. The monologues in late-night shows have turned into profanity-laced political rants that Standards

Home of the Brave
Discover incredible stories of Americans overcoming obstacles to fight for a better tomorrow.